Our goal will be to predict the stock market. As an initial simplification, we will be predicting:

Where we use as given given its history and past world event history (looking back N days).

The news source (GDELT) is lagged by one day, and it does not have timestamps for the news. Thus any model that we build can only be applied assuming there is an existing real-time scraper for the data.

The insufficiency in our data source here leads to other interesting directions we can take our analysis - we can train models to be lagged arbitrarily when simulating from historical events (or not at all). The predictive power of all of the models may vary. Thus, if we have time, an interesting third direction we may explore is

Previous work as looked at forecasting various financial data with a broad array of techniques from traditional machine learning approaches to finding new feature sets from Wikipedia, Google, and the news.

Two strategies: buying and selling whole amount when increase/decrease predicted, and buying/selling only 10% at a time

This is a database of worldwide data. Raw data link on GDELT site.

The Global Database of Events, Language, and Tone (GDELT) is the largest, highest resolution, and most detailed open dataset of global human society. It is freely available and uses a variety of international news sources with daily updates, contains more than 250 million events from 1979 to present, is CAMEO-coded (for simple indexing of events) and regularly introduces new enhancements to the data.

To achieve that, GDELT Project monitors the world’s broadcast, print, and web news, from nearly every corner of every country in over 100 languages and identifies the people, locations, organizations, counts, themes, sources, emotions, counts, quotes and events driving our global society every second of every day.

The GDELT provides a knowledge graph that describes not only “what” happened but “how” it happened. Accordingly, as the GDELT Global Knowledge Graph processes each news article it extracts a list of all people, organizations, locations, and themes from that article and concatenates them together to form a unique “key” that represents that particular combination of names, locations, and themes. All articles containing that same unique combination of names, locations, and themes, regardless of how similar the rest of the text is, are grouped together into a “nameset”. The Graph provides a daily intensity weighting which essentially weights each day towards those that occur in the greatest diversity of contexts, biasing towards days with many different contexts being discussed. It is relatively immune to sudden massive bursts of coverage (such as from a major sudden situation) and instead tends to capture the broadest temporal trends. This can be used to evaluate the magnitude of events/turmoil witness each day, in every country. 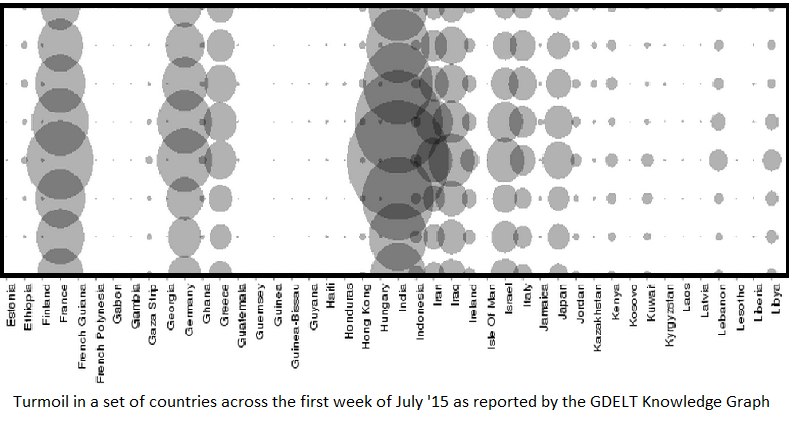 The row data file is a csv with around 57 columns that indicate several variables such as the:

The CAMEO code enables for numeric categorization of events. Since the dimensionality of ``events that can occur” is very large, the CAMEO system enables compactification and reduction of this space into something more analyzable. CAMEO improves upon previous event categorization schemes, WEIS and COPDAB. Features: 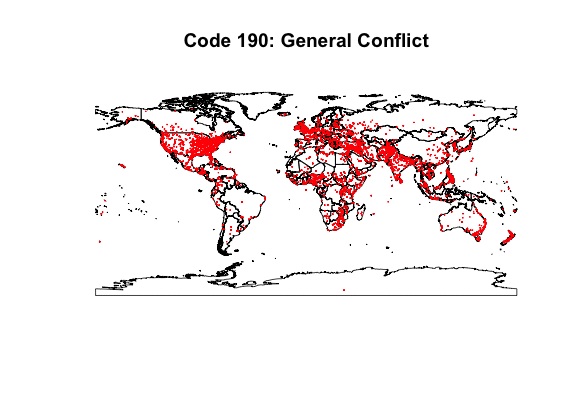 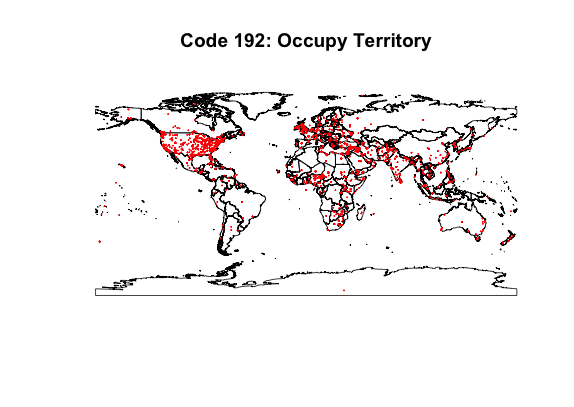 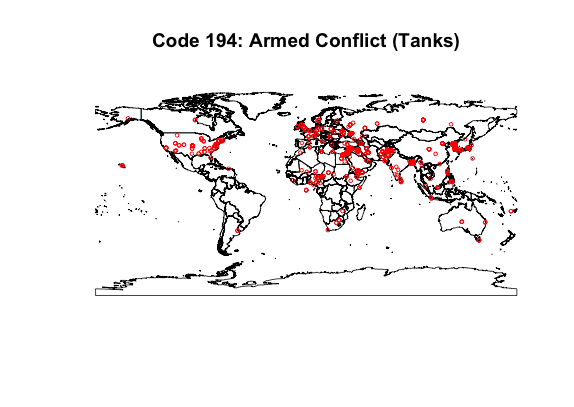 This set of maps shows how news information will intersect with geographic locations. The data plotted is the week of March 1st, 2015. Each dot corresponds to an event labeled with the code indicated. Code 190 represents general conflict data and is useful for seeing the general spread of data. Of note are Brazil, Russia, and China, which either have or report very few conflicts in their news. Code 192 (occupy territory) shows how the labelling of news can be imprecise. Code 194 (armed conflict) shows there there are meaningful local patterns to be found.

We retrieved stock pricing information from Yahoo Finance for S&P 500 (^GSPC) from January 1, 2005 to December 31, 2005. This data included the S&P’s opening, high, low, closing, and adjusted closing price for each date in this range. We also looked at GDELT data for 2005.

Some Key columns that we are looking at 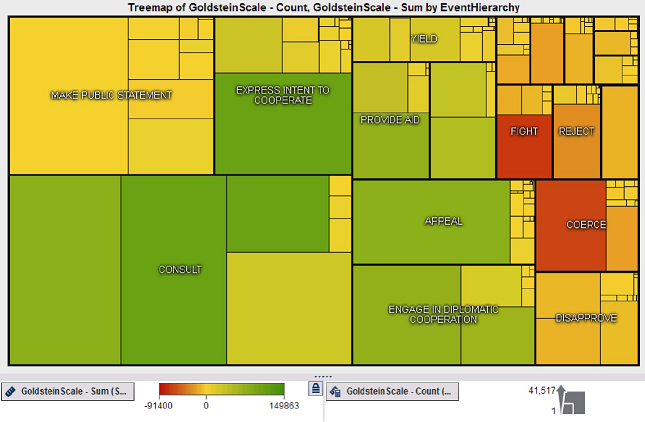 “GoldsteinScale” - Each CAMEO event code is assigned a numeric score from -10 to +10, capturing the theoretical potential impact that type of event will have on the stability of a country.

“NumMentions”, “NumSources”, “NumArticles” - a proxy for the impact of the event y looking at news sources that mention it.

Exploration into actors and relationships

We suspect that there is some lower dimensionality to the data, in the sense that:

However, there’s no easy way of defining a vector space on events - e.g., it doesn’t make sense to subtract the ordinal of event code 030 from event code 010 and calucalte the square of the difference.

Let’s take a look at number of unique “destination” or “receiving” actors, Actors2, for each Actor1, and vice-versa. Note in the following there are a few magic columns: 7 - Actor1Name, 17 - Actor2Name, 28 - EventBaseCode

One thing we already notice is that the distributions of actor/actee are pretty identical, so the event interactions are pretty symmetric in terms of frequency of occurences of actors.

So it looks like we have three important segments to take a look at: lower quantiles and the IQR (<75%), 75th quantile up. It looks like we have some peculiar outlier above 400 mentions, but taking a look at what those frequent actors are reveals that the outlier should be considered part of the group, and isn’t a data anomaly:

An important conclusion here is that it may be useful to scale event importance agains the actor frequency, otherwise US news will unfairly dominate the impact on forecasting, just because news there has higher coverage. We see this is the case for the code 190 event above as well. At the very least it’ll be important to learn the weights for each actors.

Now let’s take another look at the shape of our segmented populations. First the infrequent actors: 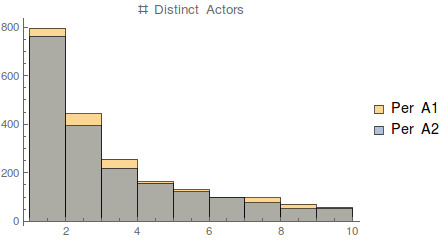 The above is an overlay of the historgrams. Again, very similar distributions, and, as we expect, we have an exponential decay in frequency. For the “infrequent” actors, it seems like events are sporadic, independent, and probabilistic occurences. Another intersting question to ask is among the infrequent actors, how many interactions are with other infrequents?

Now for the frequents: 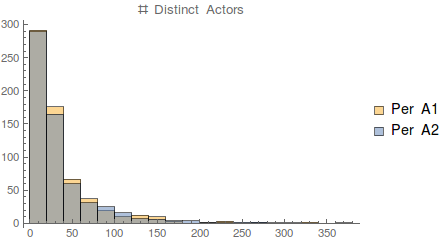 Similar pattern as infrequent actors, perhaps at a different rate of exponential decay. 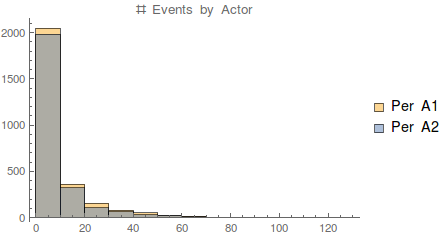 Again, very similar to the actor situation, we find that the event-actor graph is fairly sparse, in that few actors have very many events involved (which gives some indication of a lower dimensionality to the categorical data).

It’d be nice to pursue some kind of dimensionality reduction on the categorical values. This is valuable because a lot of shape and interesting features is hidden in the lower end of the exponential distributions we’re seeing here, and that has a lot of potential for predictive power since it will enable us to distinguish events even when they’re sparse in the context of which actors they occur to.

Read the GDELT news data from 2005

Histograms for the Goldstein Scale, Number of Mentions and Average Tone of news articles 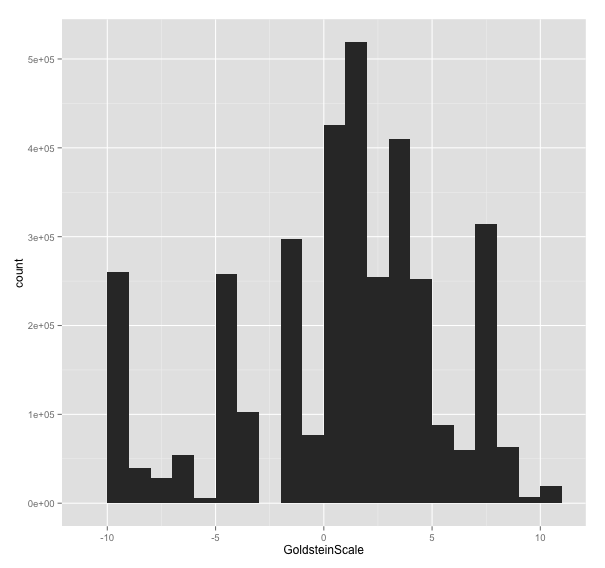 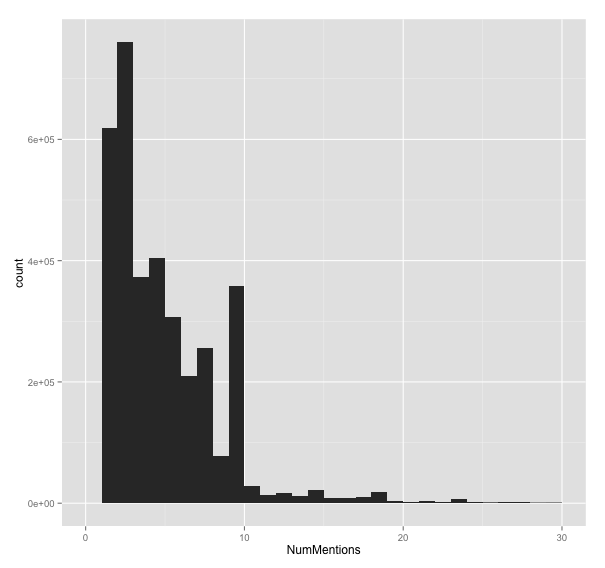 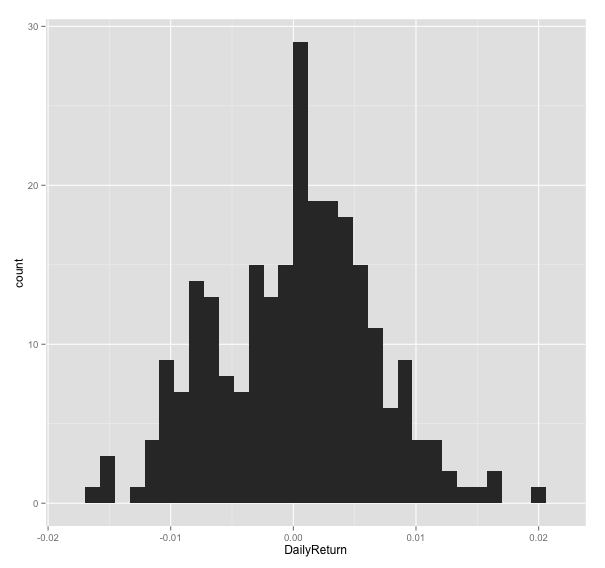 Volume of trading vs Average Number of Mentions 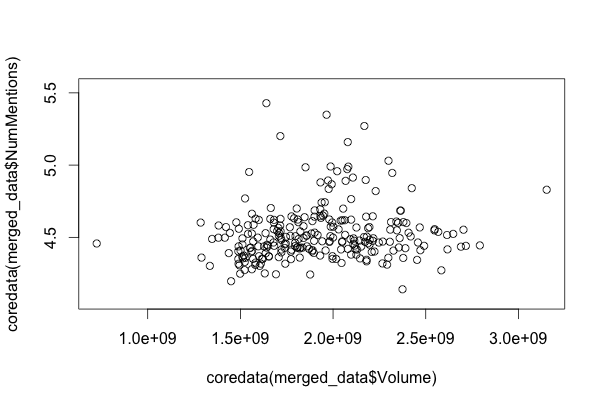 There seems to be almost no correlation between the number of mentions and the price data. 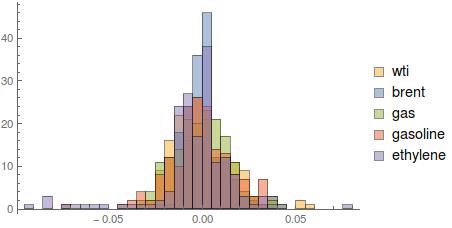 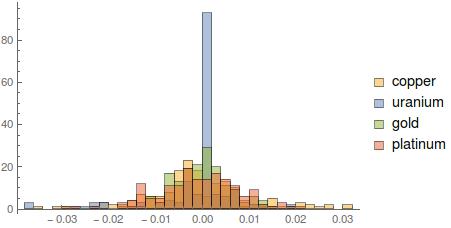 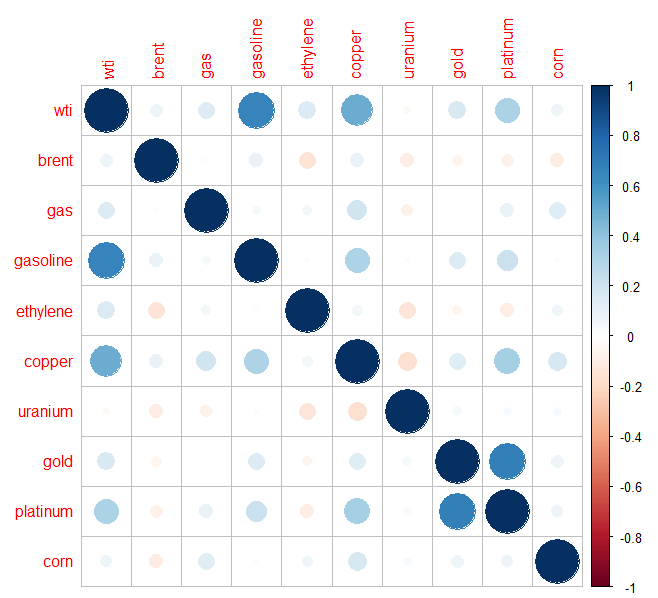