High-end hardware reaches 64 cores and 2TB of data. With near-linear speedup that Ligra offers, this doesn’t suffer from issues that distributed systems do.

Ligra offers a few primitives to operate on graphs.

A graph \(G = (V, E)\) is represented internally in Ligra by what is effectively an adjacency list, but users do not interact with it.

A \(vertexSubset\), \(S\subset V\), is the fundamental datatype of in Ligra. Edge information is exposed through operations on subsets, which are identified by the function answering \(v \in S\) for vertices \(v\).

See the Framework Interface section below.

Why does Pregel-like computation suck?

What are the limitations of GraphLab, then? Single-graph computation only: no multiple vertex subsets (bidirectional search, forward-backward search disabled). 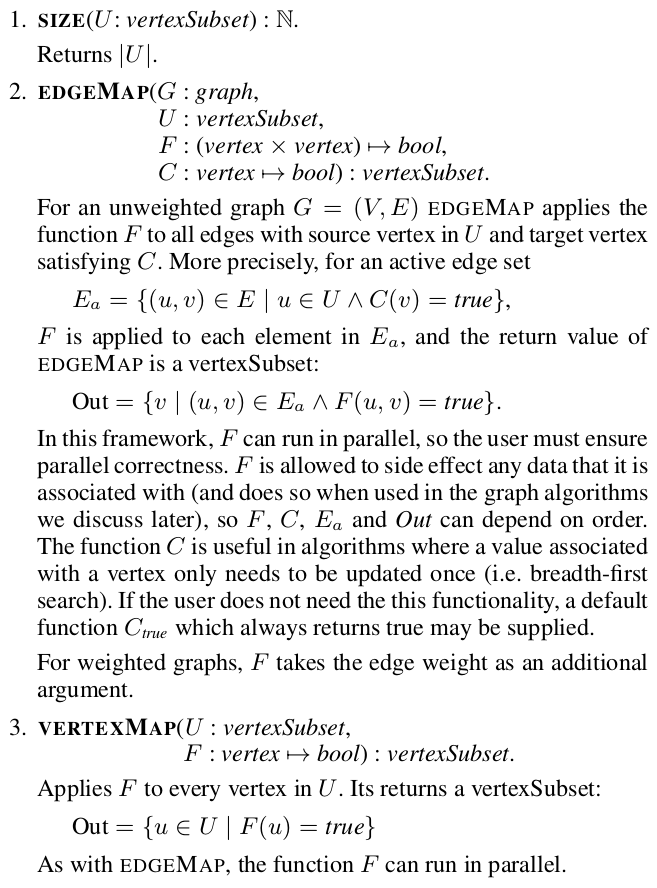 It’s the derivation of the \(vertexSubset\)s that determines the linearization points for the algorithm’s computation: the sets are a method of control flow as much as they hold data, much like lists in Haskell.

Sparse representation is an unordered list of vertex indices.

Dense representation is a boolean array of size \(\left|V\right|\).

Note that dense conversion is eager in the sense that the threshold is only exceeded in the worst case - if \(F\) always selects each vertex.

Threshold of \( \lvert E\rvert/ \kappa \) used. By looking at Amdahl’s law we can find the optimal time to spend on linear pre/post-processing, but then this is dependent on \(F\)’s runtime and how selective \(C\) is.

Note a \(\kappa\)-threshold implies we can’t speed up more than \(\sim \kappa r\), with \(r\) being the ratio of linear pre/post-processing work time to average \(F\) runtime.

Always produces sparse output (input can be anything). Note that in sparse computations Ligra does not sacrifice parallelism by parallelizing over out-edges as well.

This is the out-degree version of algorithm 3. Paper says it’s up to the user to figure out which one we should use. It’s kind of silly that they offer both without justifying the tradeoff numerically. Giving both out means you need to maintain the reverse edge mapping (which they do, check the code). The tradeoff is as follows: the in-degree version (Algorithm 3) lets you break the loop if the condition function \(C\) tells you to; this reduces total work. However, each such loop can’t be parallelized, which is a problem for skewed vertex indegree cases, and it’s also the only reason for keeping the extra edges around.

To add an edge, we’d need to insert in the middle of an array. Thus, Ligra only works with static graphs.

Described in line with the implementations.

See the paper for details of the graphs and algorithms.

Ligra scales extremely well - the fact that it gets linear speedups into hyperthreads means that it’s very cache-effective. It also means there’s room to grow, speed-wise, as CPU parallelism increases.

Scalability is one thing, though, if distributed systems can run more machines, albeit for more money, but get the job done sooner, who cares? Time is more valuable. The thing is, they don’t. For example, their 40-core quarter-TB finished Bellman-Ford single-source shortest paths in 2 seconds for a \(2^{27}\)-vertex binary tree compared to 20 seconds for a 300-node commodity Pregel cluster for a tree half as large.

Certain algorithms require graph modifications. Ligra needs a memory-efficient adjacency list implementation (to handle large graphs so it is comparable to other frameworks).