MapReduce offers an abstraction for large-scale computation by managing the scheduling, distribution, parallelism, partitioning, communication, and reliability in the same way to applications adhering to a template for execution.

MR offers the application-level programmer two operations through which to express their large-scale computation.

Note: the types I offer here are not identical to the original map reduce; my version is simplified somewhat. Though both are equivalent in the sense that they reduce to one another.

Run-time type requirements (necessary for the implementation) are that K is both “shuffle-able” and equality-checkable. The ability to shuffle a type depends on one’s partitioning function. In the paper, this may be a requirement on orderability or hashability.

Evaluation’s signature, as presented in the MR paper, in pseudo Haskell, would be:

Word count can be implemented pretty easily with the above definitions, where we map over a list of words, converting each word into the pair (word, 1), then the reduce operations sums the second part of each pair.

Map reduce was built with the intent of distributing work among commodity hardware with up to thousands of nodes. Storage is assumed to be HDD and inexpensive. Network assumptions are that we have 100 Mbps to 1 Gbps.

For \(M\) map tasks and \(R\) reduce tasks, with a partitioning function (which may be either a hash or interval rank, depending on whether output was expected to be sorted or not), MR works in the following manner. 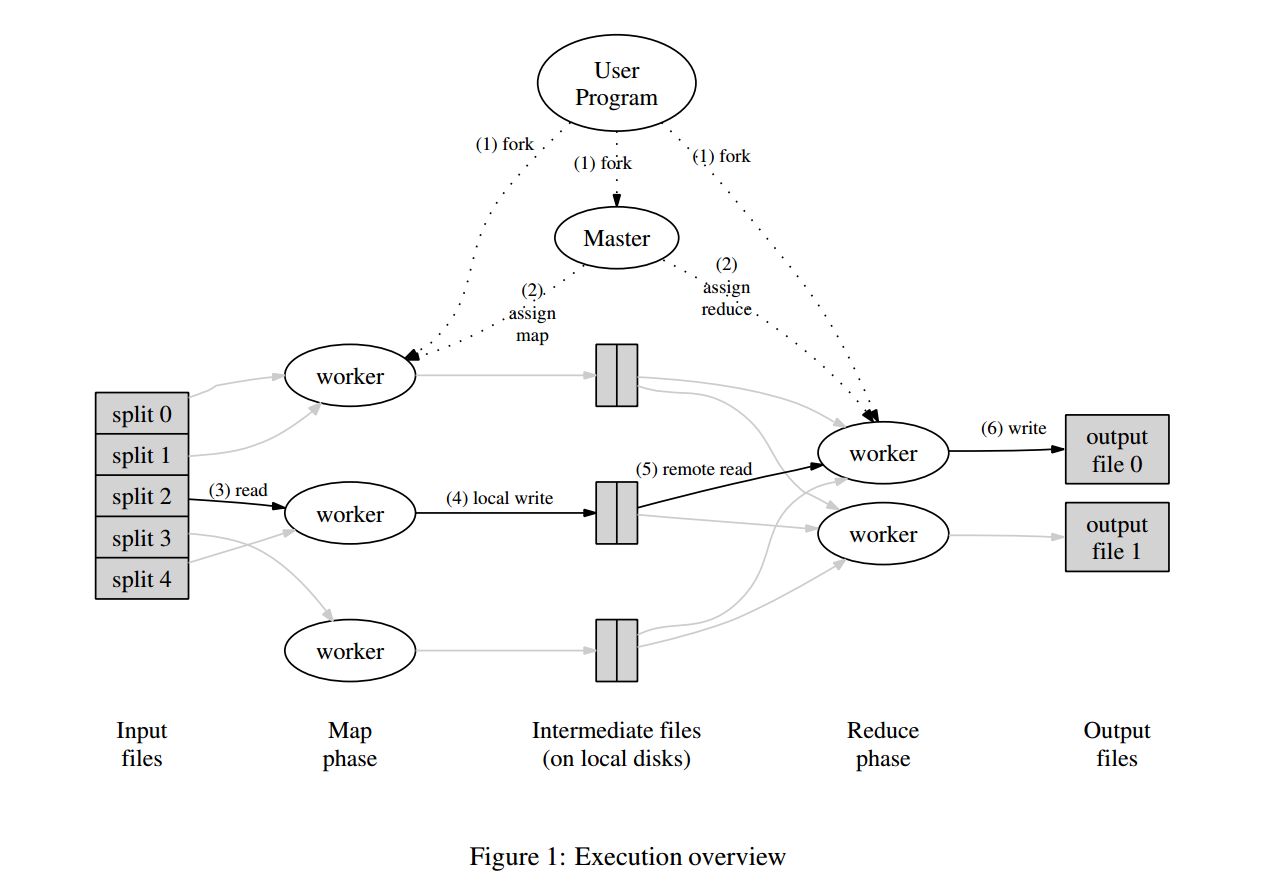 The output is then stored in \(R\) separate files, one for each reducer.

From step (4), we see that the total metadata maintained on the master is \(O(MR)\). Scheduling decisions require an additional \(O(M+R)\) amount of work.

Failures are handled simply by re-launching the task when a worker fails to respond to a heartbeat after a certain amount of time. Deduplication is performed on the master (i.e., if a worker is assumed lost, and the task is restarted, but it then sends its results). Thus, only-once reducer input idempotency is maintained by having synchronous evaluation: the master isn’t notified of the map output until it’s completely ready.

The master node is a single point of failure. It can be made reliable, but is so rare that it is often easier to just restart the task.

Deterministic functions will be equivalent to a sequential run of the program.

Non-deterministic functions result in outputted reduce tasks from some combination of some runs of the program, so they are not guaranteed to be equal to any single run of the sequential program.

The network-scarcity assumption means that the optimal blocking size for the computation should be around the size that the distributed state store uses, to avoid extra low-capacity blocks from being passed around. For GFS, this was 64MB. By integrating with GFS, the master is able to schedule map tasks in locations that house the actual data. This allows for step (1) from above to avoid any network reads.

Stragglers, caused by bugs or hardware failures, are common with an increase of the number of workers. They are resolved by launching backup tasks near completion, which reduce the probability of all tasks straggling (only one needs to finish). Removing this optimization in the sorting example causes a 44% slowdown.

A combiner function is an associative, commutative Reduce-type function that can be iteratively applied in a tree structure increase the reduce task’s span (level of parallelism). MR applies the combiner on the map task side, which can reduce communication size and overall compute time.

Performance was tested on 1800 machines with a two-level tree-shaped switched network of 100 Gbps aggregate bandwidth, 2GHz processors, and 3 GBs of RAM per node.

Terasort takes 891 seconds. For comparison, at the time, the best TeraSort was 1057 seconds. Note that for general sorting, MR recommends a sampling pre-pass for split computations.

MR was observed to be biased towards faster shuffle and input rates. Output is slower because it makes replicated writes.

MR introduced the notion of a restricted, simple API that allows for expressiveness required for many tasks while maintaining simple semantics and enabling distributed processing. Network bandwidth is observed to be the bottleneck. Finally, replication-based variance reduction for latency is introduced as a technique (though it may be used for other goals as well).