In Roller Coaster Tycoon 2, you play as the owner of an amusement park, building rides to attract guests. One ride you can build is a maze. It turns out that, for visual appeal, guests traverse mazes using a stochastic algorithm.

Marcel Vos made an entertaining video describing the algorithm, which has in turn spawned an HN thread and Math SE post.

I really enjoyed solving the problem and wanted to share the answer as well as some further thoughts.

A maze in this game is a 2 dimensional grid of tiles, with an entrance tile and an exit tile. The goal for guests is to get to the exit. Hedges on the edges of tiles prevent guests from moving in certain directions, as a result the paths guests can take form a 2-dimensional grid world with only certain movements permitted. 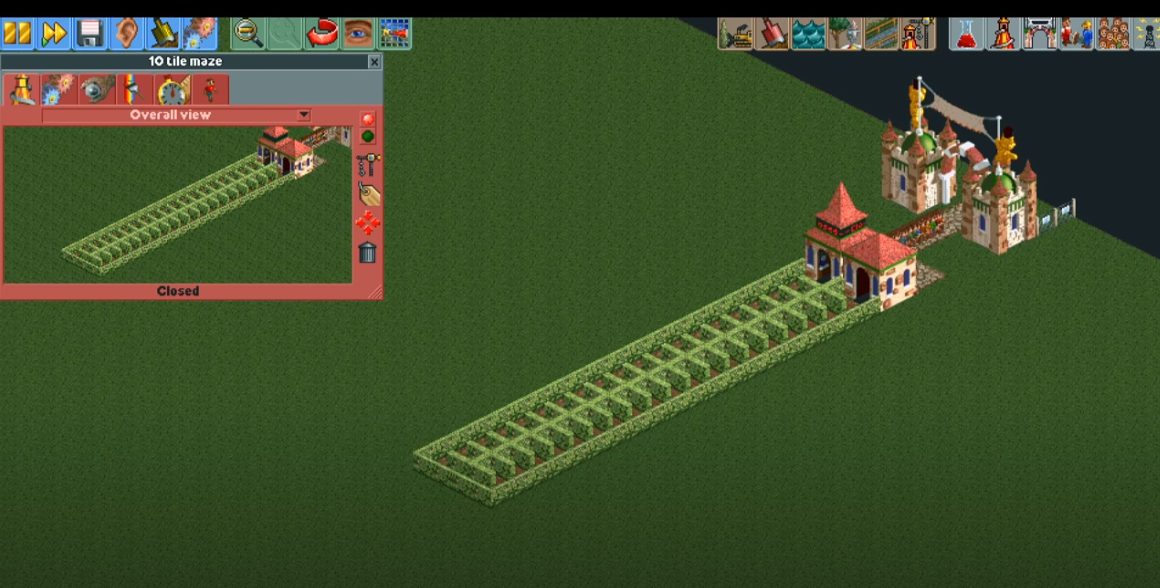 What’s interesting about the maze above, Marcel notices, is that it’s very easy for us to solve if it was a real-world maze, but it takes guests years of in-game time to solve it.

The maze is pretty simple: it’s got one long corridor to the exit (this particular pictured one wraps around, but let’s pretend it just goes straight), and lots of “inlets” to the left that immediately result in dead ends, which no one actually solving the maze would go into.

A closer look at how the guests path find gives some indication of what’s going on.

Marcel does a really great job explaining this, but I’ll give a quick overview. 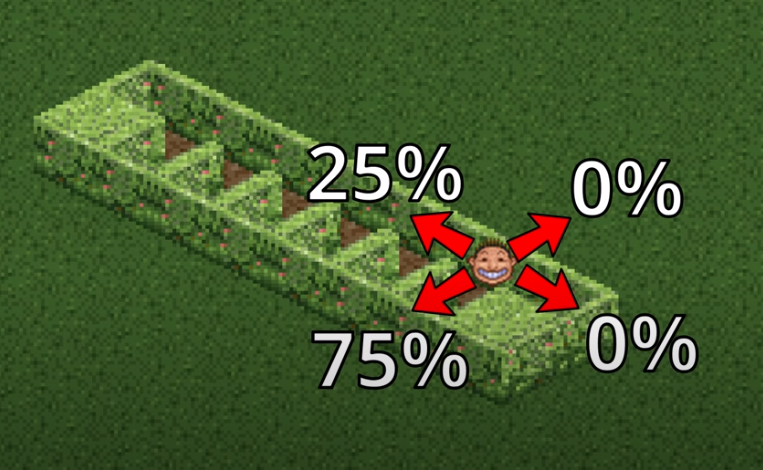 Whenever a guest enters a tile from a certain direction, the game figures out what “valid” exit tiles would be. In particular,

In particular, we see that when the guest enters the second tile from the first, as pictured above, they’re facing forward, so moving back is invalid. The right side is blocked. Both right and back directions result in going left by the clockwise bias rule, so there’s a \(75\%\) chance of moving left as pictured.

If you look further into the video, you’ll notice that when you face the other direction, you’re much more likely to move back in the direction of the entrance than going into the inlet.

Given a maze with a single corridor of length \(n\) with single-tile inlets to the left (facing the exit from from the enterance), how long will it take, on average, for a guest to complete the maze?

The Math SE poster took a look at some specific finite values of \(n\) to get a sense of what the solution looks like, and in doing so constructed some valuable abstractions for the problem.

First, let’s describe every state in the maze explicitly. We have \(\mathrm{start},\mathrm{end}\) tiles on either side of the maze.

But between those we have a repeated pattern: you’re either on the \(k\)-th tile of the corridor, where you could be facing forward (towards the exit) or backwards (towards the entrance) or away from the inlet (towards the right hedge, if you came from an inlet), or you’re in an inlet, facing into a hedge.

where the meaning of each state is given by

This fully defines a Markov chain on \(4n+2\) states. Represented pictorially, each \(k\)-th block looks like the following. 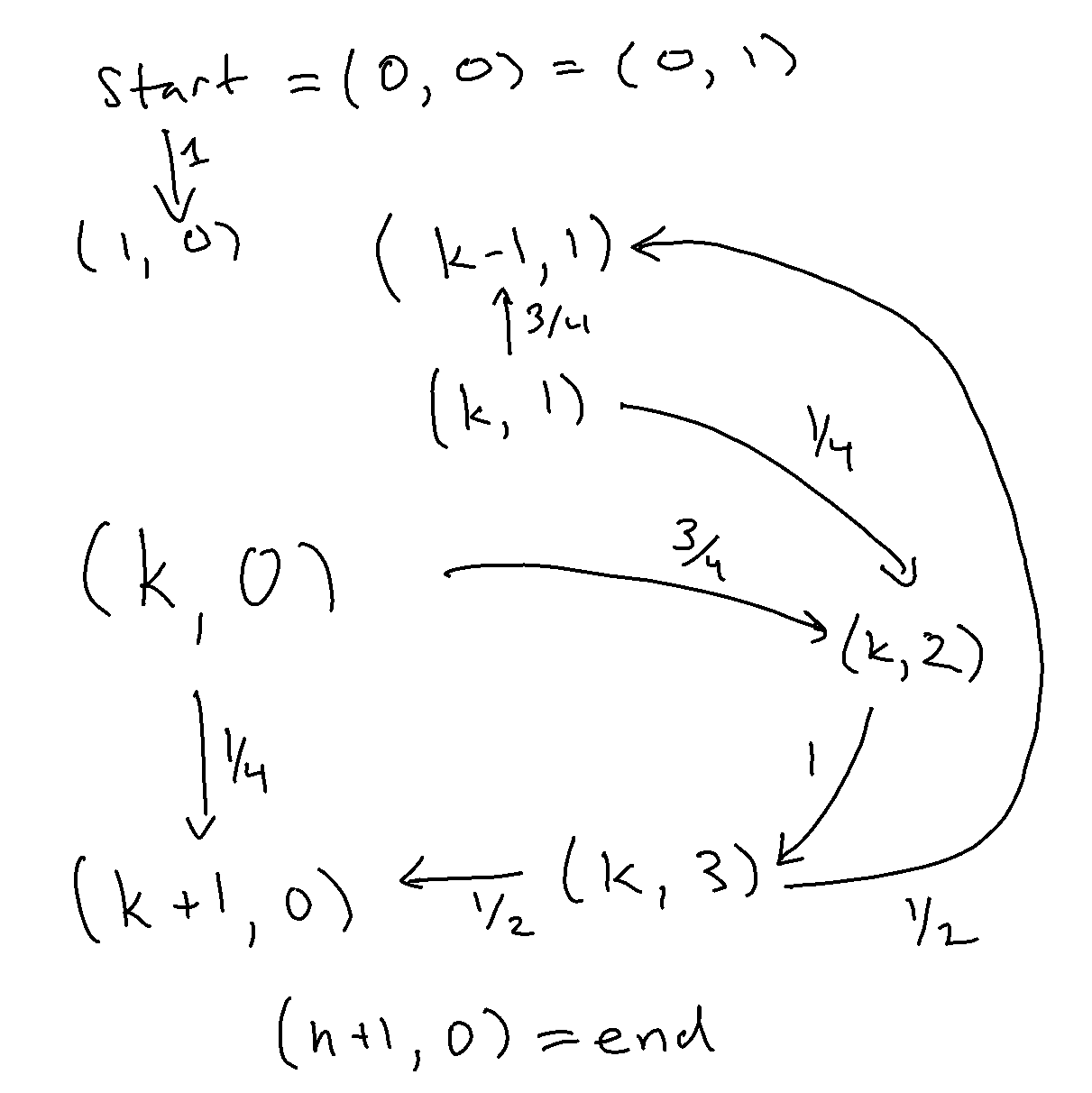 The SE poster goes on, providing a solution for specific \(n\).

Sure enough, our time to solve clearly follows an exponential pattern. 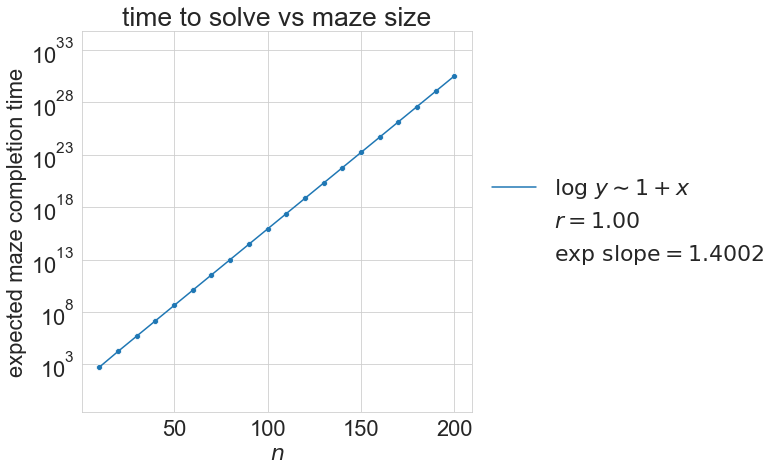 But, how do we prove this? Tune in next time for the RCT2 Solution.