The main paper contributions in this regard were a new algorithm for computing the top-\(k\) scalars of a vector on the GPU and an efficient k-means implementation.

Parsimony is important. Not only does it indicate you’re using the right representation for your problem, but it’s better for bandwidth and better for cache. E.g., see this wiki link, HNSW on 1B vectors at 32 levels results in TB-level index size!

Prioritize parallel-first computing. The underlying algorithmic novelty behind FAISS takes a serially slow algorithm, an \(O(n \log^2 n)\) sort, and parallelizes it to something that takes \(O(\log^2 n)\) serial time. Unlike serial computing, we can take on more work if the span of our computation DAG is wider in parallel settings. Here, speed is proper hardware-efficient vectorization. 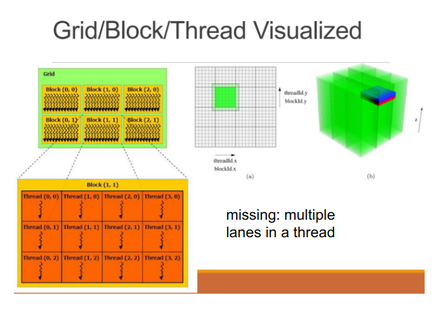 There might be one or more blocks scheduled to a single streaming multiprocessor, which is itself a set of cores. Cores have their own floating point processing units and integer units, but other supporting units like the MMU-equivalent are shared.

My takeaways from this section were the usual “maximize the amount of work each core is doing independently, keeping compute density high and memory accesses low, especially shared memory”, but with two important twists:

Note there are 32 threads to a warp, we’ll see that come up.

FAISS answers the question of “what are the closest database points to the query point” by constructing a 2-level tree. Database vectors are further compressed to make the tree smaller.

For a 2-level tree, a constant factor of \(\sqrt{n}\) is the optimal cluster size since then the exact search that we do is as small as possible at both levels of the tree.

Since it’s possible the point might be near multiple centroids, FAISS looks at the \(\tau\) closest centroids in the top level of the tree, and then searches all cluster members among the \(\tau\) clusters.

So the larger search occurs when looking at the second level.

Compression reduces I/O pressure as the second-level’s database vectors are loaded. Furthermore, the specific compression algorithm chosen for FAISS, Product Quantization (PQ) enables distance computation on the codes themselves! The code is computed on the residual of the database vector \(\textbf{y}\) from its centroid \(q_1(\textbf{y})\).

The two-level tree format is the inverted file (IVF), which is essentially a list of records for the database vectors associated with each cluster. 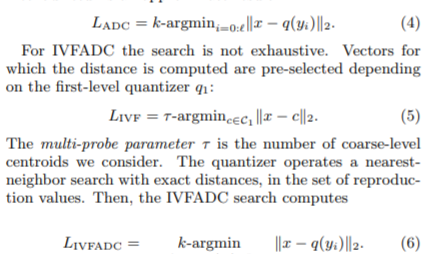 The above overview yields a simple algorithm.

The meat of the paper is doing these steps quickly.

This compression technique is applied to the residual of the database vectors for their centroids, meaning we have PQ dictionaries for each centroid.

The key insight here is that we can also break up our query vector \(\textbf{x}=[\textbf{x}^1, \cdots, \textbf{x}^b]\), and create distance lookup tables on the sub-vectors individually, so the distance to a database vector is just a sum of \(b\) looked-up values! 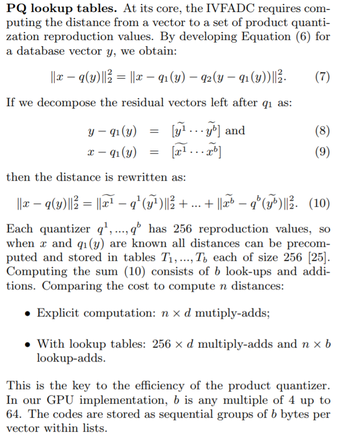 OK, so now comes the hard part, we just did steps 1 and 2 really fast, and it’s clear those are super parallelizable algorithms, but how do we get the top (smallest) \(k\) items from the list?

Well, on a CPU, we’d implement this in a straightforward way. Use a max-heap of size \(k\), scan through our list of size \(n\), and then if the next element is smaller than the max of the heap or the heap has size less than \(k\), pop-and-insert or just insert, respectively, into the heap, yielding an \(O(n\log k)\) algorithm.

We could parallelize this \(p\) ways by chopping into \(n/p\)-sized chunks, getting \(k\)-max-heaps, and merging all the heaps, but the intrinsic algorithm does not parallelize well. This means this approach works well when you have lots of CPUs, but is not nearly compute-dense enough for tightly-packed GPU threads, 32 to a warp, where you need to do a lot more computation per byte (having each of those threads maintain its own heap results in a lot of data-dependent instruction divergence).

The alternative approach proposed by FAISS is:

Squinting from a distance, this looks similar to the original algorithm, but the magic is in the “chunkification” which enables full use of the GPU.

As mentioned, this innovation is essentially a serial \(O(n\log^2 n)\) in-place mergesort that has a high computational span.

The money is in the merge operation, which is based on Batcher’s bitonic bit sort. The invariant is that we maintain a list of sorted sequences (lexicographically). 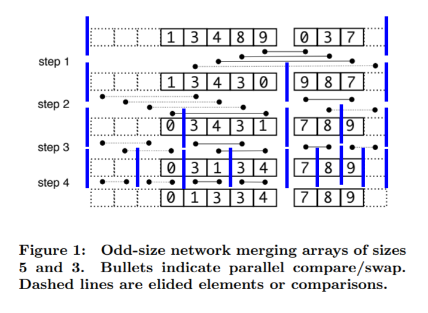 Each merge has \(\log n\) steps, where at each step we might have up to \(n\) swaps, but they are disjoint and can happen in parallel. The key is to see that these \(n\) independent swaps ensure lexicographic ordering among the sequences

This is the odd-merge (Algorithm 1) in the paper. There’s additional logic for irregularly-sized lists to be merged. We’ll come back to this.

Once we have a parallel merge that requires logarithmic serial time, the usual merge sort (Algorithm 2), which itself has a recursion tree of logarithmic depth, results in a \(O(\log^2 n)\) serial time (or depth) algorithm, assuming infinite processors.

This leads to WarpSelect, which is the chunkification mentioned earlier. In essence, our messy max-heap is a combination (and thus superset) of: 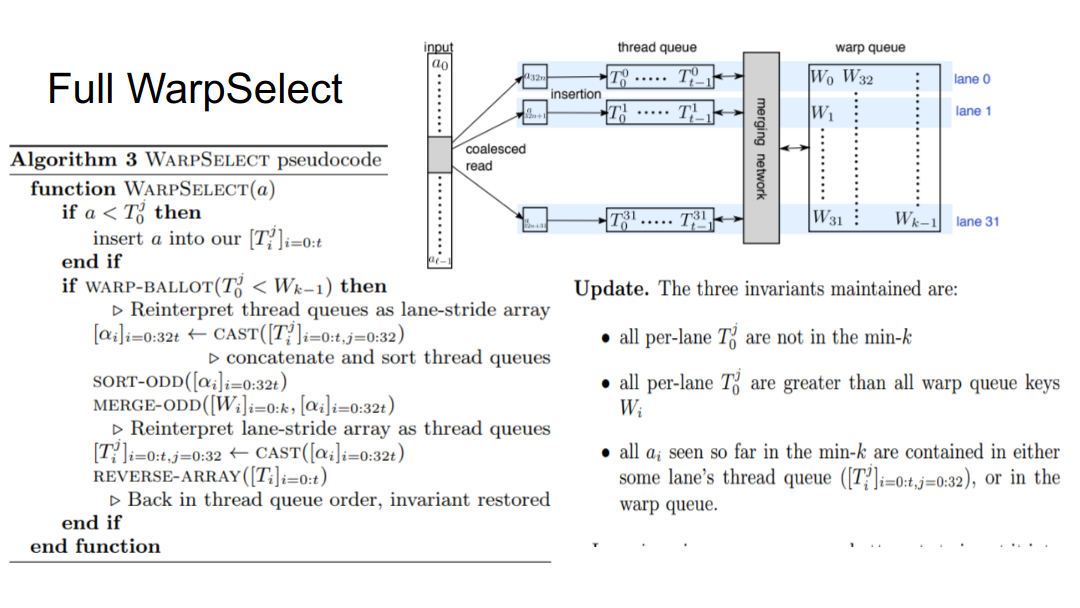 On the fast path, the next 32 values are read in, and we do a SIMT (single instruction, multiple-thread) compare on each value assigned to each thread. A primitive instruction checks if any of the warp’s threads had a value below the cutoff of the max heap (if none did, we know for sure none of those 32 values are in the top \(k\) and can move on).

If there was a violation, after the per-lane insertion sort the thread heads might be smaller than they were before. Then we do a full sort of the messy heap, restoring the fact that the strict max-heap has the lowest \(k\) values so far.

This leads to the question: why have thread queues at all? Why not make their size exactly 1?

This points to a convenient piece of slack, the thread queue length \(t\), which lets us trade off the cost of the full merge sort against the per-thread insertion sort done every time the new values are read in. The optimal choice depends on \(k\).

Remember, it’s not apples to apples, because FAISS gets a GPU and modern methods use CPUs, but who cares.

Recall from the previous post the R@1 metric is the average frequency the method actually returns the nearest neighbor (it mayhave the query \(k\) set higher). The different parameters used here don’t matter so much, but I’ll highlight what each row means individually.

HNSW is a modern competitor based on the CPU using an algorithm written 2 years after the paper. Flat is naive search. In this benchmark, the PQ optimization was not used (database vector distances were computed exactly). 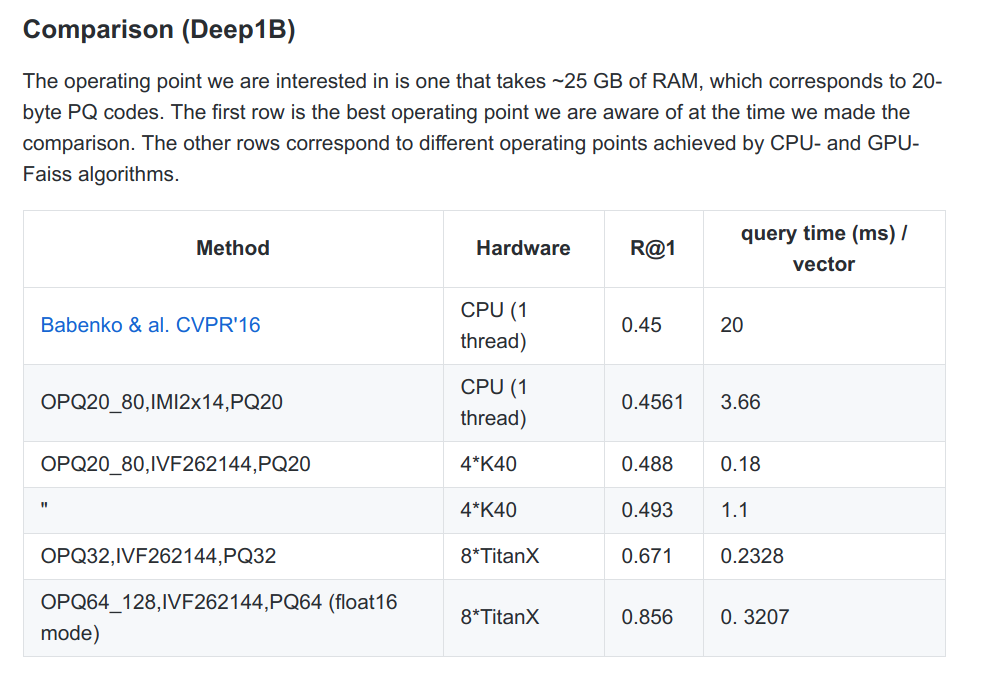 Here, for the very large dataset, the authors do use compression (OPQ indicates a preparatory transformation for the compression).

On the whole, FAISS is still the winner since it can take advantage of hardware. On the CPUs, it’s still a contender when it comes to a memory-speed-accuracy tradeoff.

The authors of the original FAISS work have themselves looked into extensions that combine the FAISS approach with then newer graph-based neighborhood algorithms (Link and Code).

Other future work that the authors have since performed has been in improving the organization of the two-level tree structure. The centroid based approach of the IVF implicitly partitions the space with a Voronoi diagram. As the Inverted Multi-Index (IMI) paper explores, this results in a lot of unnecessary neighbors being probed that are far away from the query point but happen to belong to the same Vornoi cell. One extension that now exists in the code base is to use IMI instead of IVF.

It’s also fun to consider how these systems will be evolving over time. As memory bandwidth increases, single node approaches (like FAISS) grow increasingly viable since they can keep compute dense. However, as network speeds improve, distributed approaches with many, many CPUs look attractive. The latter types of algorithms rely more on hierarchy and less on vectorization and compute density.