FAISS is a powerful GPU-accelerated library for similarity search. It’s available under MIT on GitHub. Even though the paper came out in 2017, and, under some interpretations, the library lost its SOTA title, when it comes to a practical concerns:

This post will review context and motivation for the paper. Again, the approximate similarity search space may have progressed to different kinds of techniques, but FAISS’s techniques are powerful, simple, and inspirational in their own right.

Tinder bot 1 bio: “Hey, I’m just down for whatever you know? Let’s have some fun.”

Tinder bot 2 bio: “Heyyy, I’m just down for whatevvver you know? Let’s have some fun.”

Tinder bot 3 bio: “Heyyy, I’m just down for whatevvver you know!!? I just wanna find someone who wants to have some fun.”

You’re Tinder and you know spammers make different accounts, and they randomly tweak the bios of their bots, so you have to check similarity across all your comments. How?

and users clicking on ads keep the juices flowing.

and part of trapping people with convenience is telling them what they want before they want it. Or you’re

and you’re trying to keep people inside on a Friday night with another Office binge.

Luckily for those companies, their greatest minds have turned those problems into summarizing me as faux-hipster half-effort yuppie as encoded in a dense 512-dimensional vector, which must be matched via inner product with another 512-dimensional vector for Outdoor Voices’ new marketing “workout chic” campaign.

Overlooking the fact that this is probably an image of \(k\)-nearest neighbors, this summarizes the situation, in two dimensions: 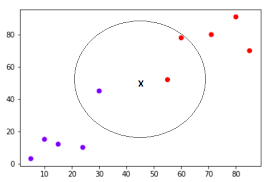 Why is this hard?

Suppose we have 1M embeddings at a dimensionality of about 1K. This is a very conservative estimate; but that amounts to scanning over 1GB of data per query if doing it naively.

Let’s continue to be extremely conservative, say our service is replicated so much that we have one machine per live query per second, which is still a lot of machines. Scanning over 1GB of data serially on one 10Gb RAM bandwidth node isn’t something you can do at interactive speeds, clocking in at 1 second response time for just this extremely crude simplification.

Exact methods for answering the above problem (Branch-and-Bound, LEMP, FEXIPRO) limit search space. Most recent SOTA for exact is still 1-2 orders below approximate methods. For prev use cases, we don’t care about exact (though there certainly are cases where it does matter).

FAISS itself is built on product quantization work from its authors, but for context there were a couple of interesting approximate nearest-neighbor search problems around.

Tangentially related is the lineage of hashing-based approaches Bachrach et al 2014 (Xbox), Shrivastava and Li 2014 (L2ALSH), Neyshabur and Srebro 2015 (Simple-ALSH) for solving inner product similarity search. The last paper in particular has a unifying perspective between inner product similarity search and \(L^2\) nearest neighbors (namely a reduction from the former to the latter).

However, for the most part, it wasn’t locally-sensitive hashing, but rather clustering and hierarchical index construction that was the main approach to this problem before. One of the nice things about the FAISS paper in my view is that it is a disciplined epitome of these approaches that’s effectively implemented.

Recently hot new graph-based approaches have been killing it in the benchmarks. It makes you think FAISS is out, HNSW and NGT are in. 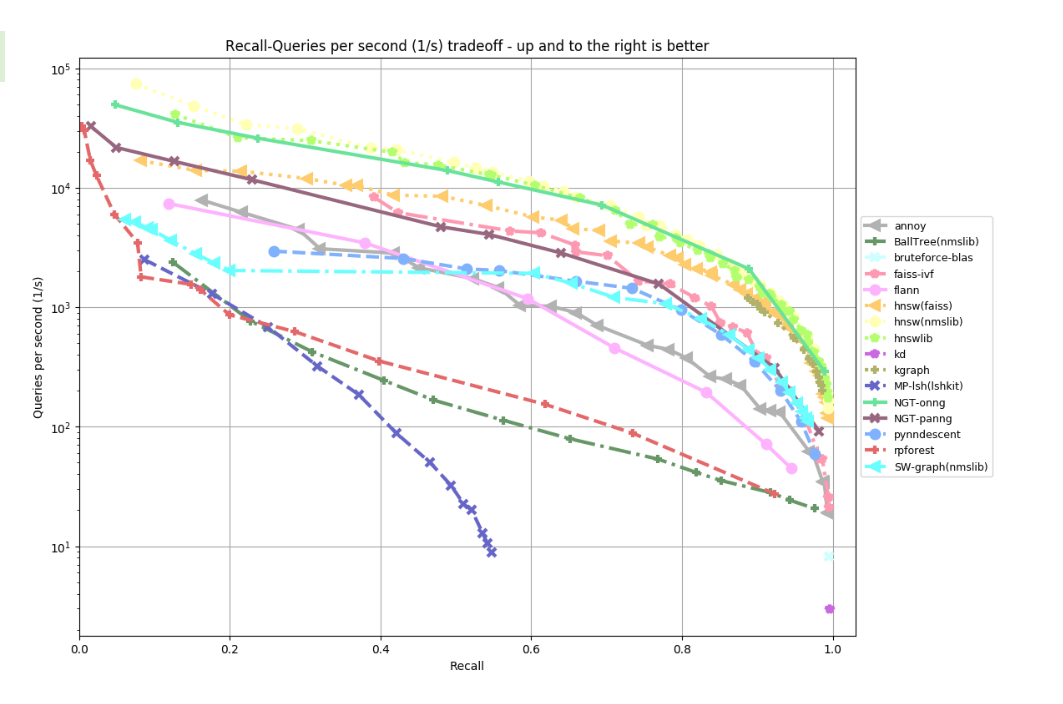 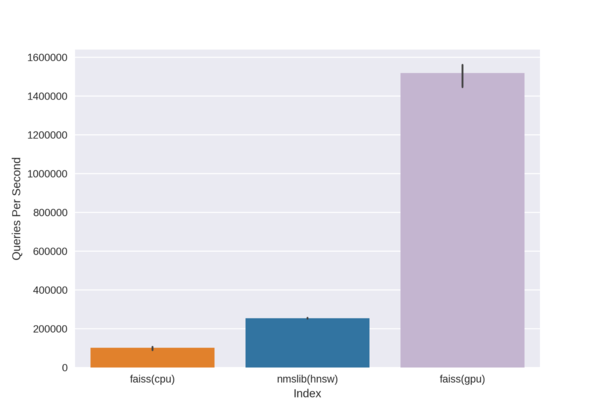 You might say this is an unfair comparison, but life (resource allocation) doesn’t need to be fair either.

FAISS provides an engine which approximately answers the query \(L=\text{$k$-argmin}_i\norm{\textbf{x}-\textbf{y}_i}\) with the response \(S\).

The metrics for evaluation here are:

In the next post, I’ll take a look at how FAISS addresses this problem.